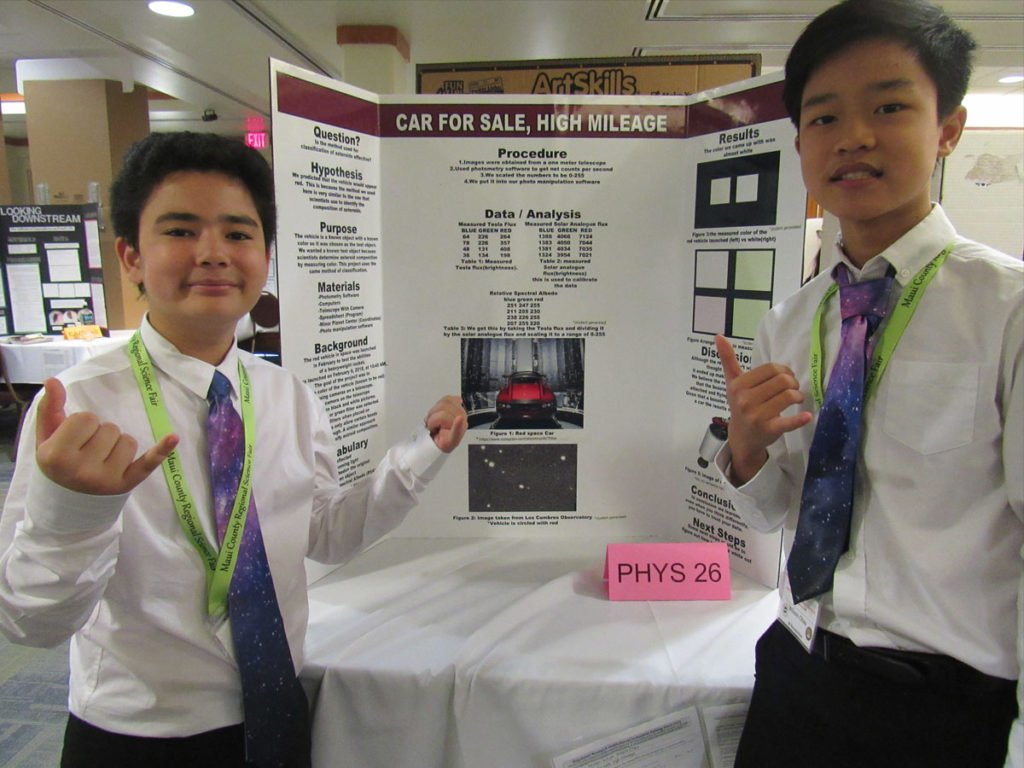 First-place Maui County Regional Science & Engineering Fair Junior Division winners Holden Suzuki and Wilson Chau, Maui Waena Intermediate School STEMworks™ 6th graders, used the scientific method of photometric observations in their award-winning project, “Used Car, High Mileage”. “The purpose of our project was to view the compositions of asteroids through using color, the method commonly used by scientists,” Suzuki and Chau said. “We did this by gathering images of Elon Musk’s cherry-red Tesla convertible that he launched as the payload for the first flight of his new rocket, Falcon Heavy, in February 2018. The upper stage of the Falcon rocket pushed the Tesla car into an elliptical, heliocentric orbit between Earth and Mars.”

Suzuki and Chau explained, “The vehicle, having a known color, was chosen as the test object. We predicted that the vehicle would appear red because we used a method similar to the one scientists use to identify the composition of asteroids. We put data from three different filters into Astrometrica photometry software and got a color that was similar to white.  Although the result wasn’t what we thought it would be, it ended up making us think more. We believe the reason it’s white is that the white booster rocket is still attached and flying with the vehicle. Given that the booster is much larger than the car, the results make sense. In conclusion, we learned that, even when we think differently at first, we have to trust our data. Some next steps would be to figure out how to get the white out of our data.”

Holden and Wilson’s mentor, Dr. J.D. Armstrong, Educational Outreach Specialist, University of Hawaii’s Institute for Astronomy, said, “Some people thought there wasn’t really a car up there at all, so we decided to see if we could get some observations to support the claim that it was a car. The first thing that came to mind was to measure the color. This was fun and interesting science. Besides, it might be the real motivation for many of the greatest discoveries in science!”

We are extremely excited to represent Maui District in the Hawaii State Science & Engineering Fair on Oahu, set for April 8-10.