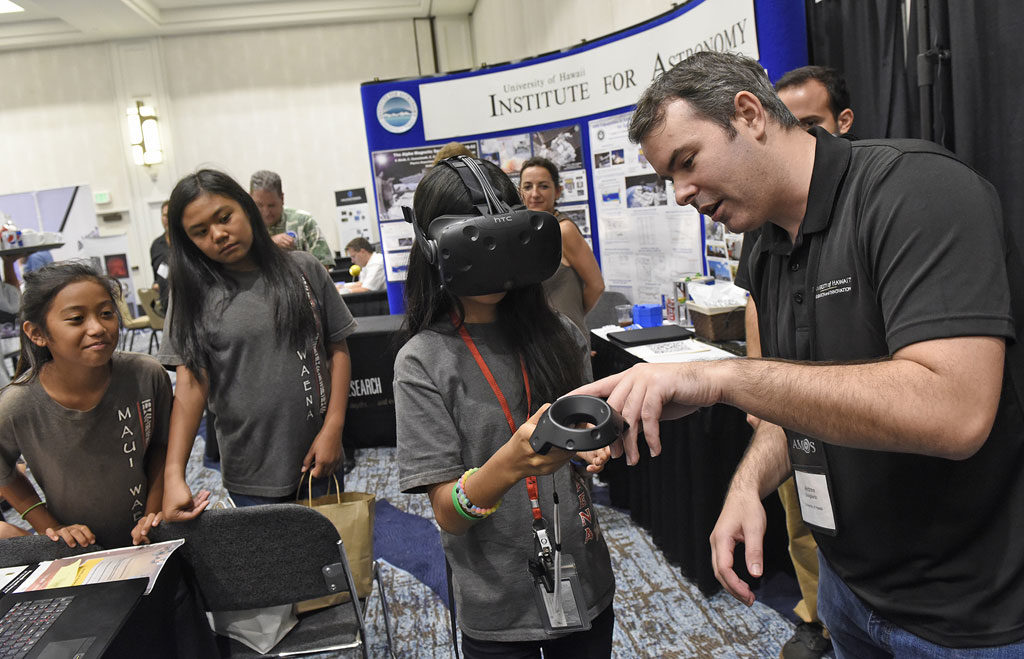 The 17th Annual Advanced Maui Optical and Space Surveillance Technologies (AMOS) Conference was held on September 20-23 at the Wailea Marriott Resort and Spa with a record-breaking attendance of over 670 participants from 18 countries. A program of the Maui Economic Development Board (MEDB), AMOS is the premier technological conference in the nation devoted to Space Situational Awareness (SSA), knowledge of objects in orbit around the Earth. Over 100 technical papers were presented along with featured speakers, poster sessions, exhibits and short courses in the fields of telescope optics, adaptive imaging, and astrodynamics.

Graduate and undergraduate students Andrew Guagliardo and Ryan Theriot from the University of Hawaii Manoa Laboratory for Advanced Visualization and Applications (LAVA) developed
new ways to visualize big data for satellite technology. “We exhibited our program called SatWatch, a virtual reality exploration of satellite orbits around Earth,” Guagliardo explained. “By pulling publicly available data from the Celestrak website, SatWatch is able to create a predictive model of orbits for a wide variety of satellites. SatWatch is an example of a complex dataset represented in an intuitive way, allowing users to easily understand satellite orbits in an interactive visualization environment.”

Maui middle school students participated in hands-on STEM (science, technology, engineering, and mathematics) activities during the Space Exploration Student Session at AMOS. They were introduced to space technologies via exhibits and science projects tailored especially for them.

“I enjoyed learning and talking to the experts at the AMOS Conference,” said Czerena Martinne Boyle, Maui Waena Intermediate School 8th grader. “My favorite booth was SatWatch, a virtual reality exploration of satellite orbits around the Earth. Through the virtual reality headset, I got to explore SSA data of numerous satellite orbits. These satellites make a big impact on the community and in the world for national security, internet, banking, telephones, television, navigation, scientific exploration and more.”

Seeing satellites orbit the earth through a virtual reality headset was an amazing experience!

Pitch Bootcamp and Business Workshop on Lāna‘i
Innovate with THINKit!