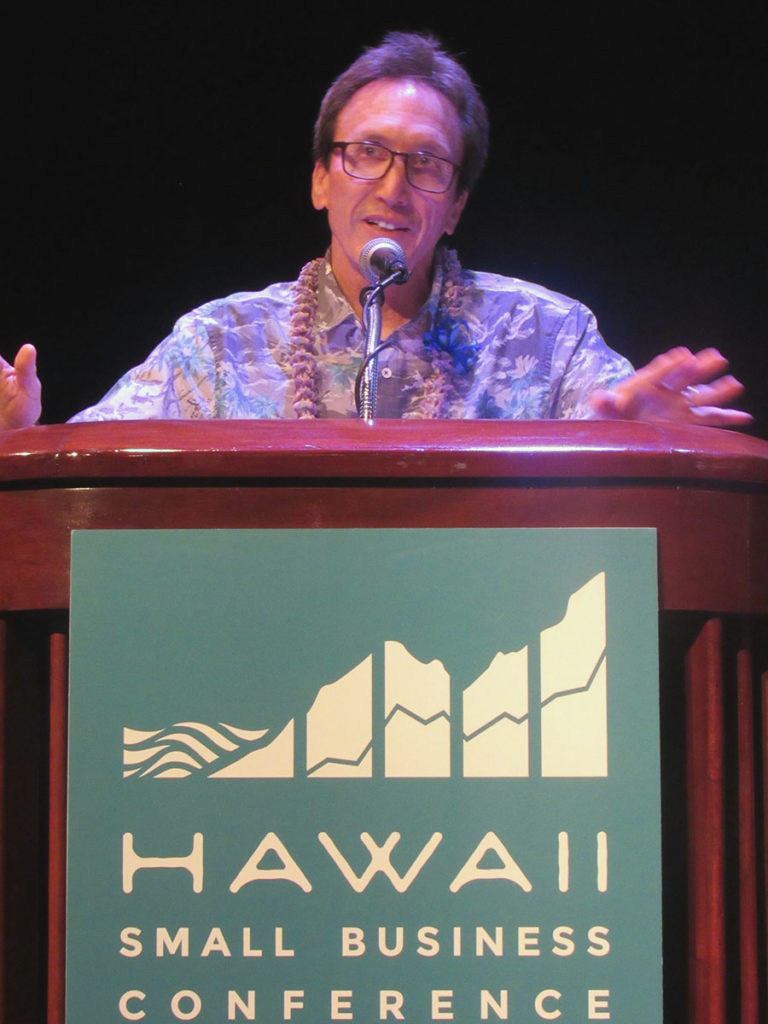 Kim Ball, a speaker at Maui Economic Development Board’s 2nd annual Hawaii Small Business Conference (HSBC), is a pioneer of the surf sports industry on Maui. Ball, who selflessly contributes to the betterment of the Maui community, talked story at the HSBC on Innovation: Learning from the Past, Creating the Future. “I’ve been in business for 36 years on Maui and believe in the importance of honesty and integrity,” Ball said. “Do business the right way, be nice, and get involved with the community.”

In 1985, Ball organized Maui’s first contest for board sailing known as the Kanaha Wind Slalom. Today, the world-renowned event, called the Maui Race Series, annually brings hundreds of windsurfers to Maui. “Windsurfing was just becoming popular. It was the fastest growing sport in the world,” said Ball. “The races were something for windsurfers to do in the summer when the north shore was flat. The first year, we had guys on asymmetrical wave boards, and every other kind of board and sail. But gradually it got a little more serious, and before we knew it, we had the best slalom racers in the world competing in our amateur races.”

Ball’s stores, Hi-Tech Maui and Shapers, represent the largest selection of boards on the island, including surfboards, stand-up paddle boards, windsurfing boards, skateboards and snowboards, as well as clothing, surf wear and protective gear. He clearly has his finger on the Maui sports scene and the changes made over the years. “It never ceases to amaze me to see the innovations that Maui guys have come up with to ride waves.”

While organizing several surf meets a year, Ball also worked to have high school surfing recognized and sanctioned as an official sport activity. Additionally, he was instrumental in developing amateur wrestling on Maui and is coordinator of the league which has grown to 11 clubs and 700 wrestlers. “I went to one Lahainaluna High School wrestling practice in 1980, and the athletic director asked me if I wanted to help coach,” he said. “I thought, I can help for one year. Look what happened!”

Years ago, the Maui News named me as one of their People That Made A Difference and in 2009 the Lahaina News named me Sportsman of the Year. Those honors are very dear to me.