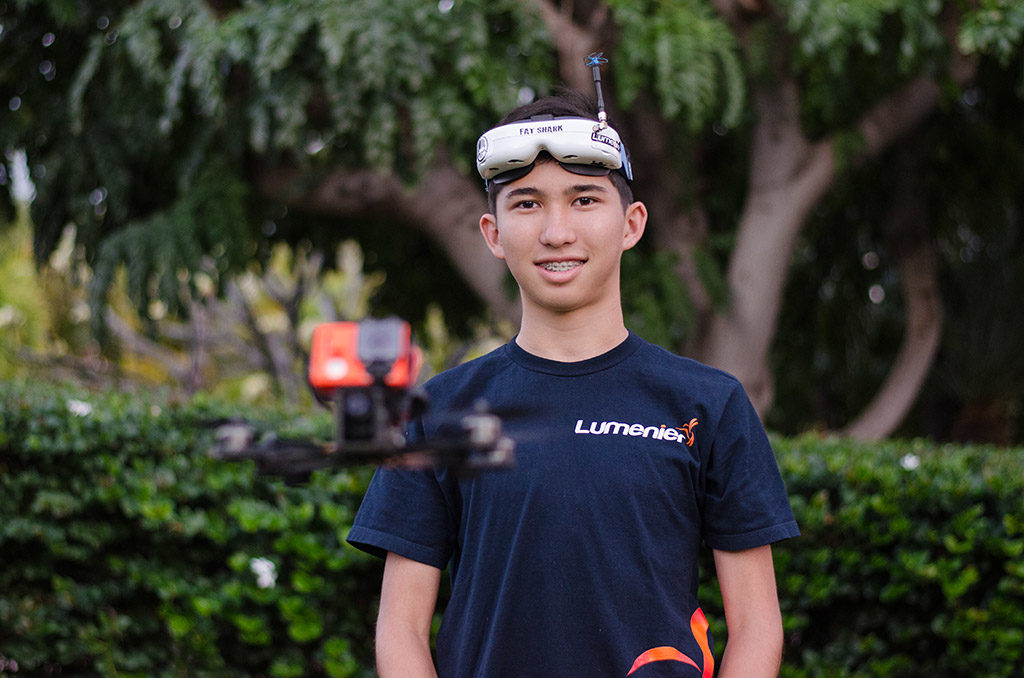 Ethan Gulnac, a 15-year-old Kihei Charter School 10th grade student, gave an extraordinary talk and drone demonstration at Maui Economic Development Board’s 2016 Hawaii STEM Conference in May. Interested in aviation since he was a child, Gulnac has learned the importance of science, technology, engineering and mathematics (STEM) education for his future aspirations.

“I have been involved with aviation my entire life,” Gulnac said. “Surprisingly enough, it all began with paper airplanes.” As a young child, Gulnac spent many of his days folding a variety of different paper airplane designs, exploring how each different fold would change the way it flew. After several years of flying model airplanes, he decided to build his first racing drone, equipped with a first-person video system. “With the headset on, I was no longer bound to the earth,” he explained. “It brought the ability to soar like an eagle!”

“STEM is everywhere in the 21st century,” said Gulnac. “Starting with science, drones are heavier than the air that they displace. In order to keep themselves airborne, they must create thrust using motors and propellers. As Newton’s second and third laws of motion state, the more air that they push in one direction, the faster they will accelerate in the opposite. In addition, drones are packed with technology. At the heart of the drone is an on-board flight controller, which constantly monitors the aircraft’s attitude. Furthermore, the design and construction of the drone require some engineering knowledge. Finally, drones are made capable of flying because of mathematics: a proportional-integral-derivative control loop manipulates the way they behave in flight.”

Last September, Gulnac met drone professionals George Purdy, co-owner of Drones Services Hawaii, and Scot Refsland of RotorSports while they were scouting out a location for the 2016 Drone Worlds competition. Recently, Refsland invited Gulnac to participate in the August Drone Nationals’ freestyle event in New York. Additionally, Drone Worlds will be held on Oahu, October 17-22. “This competition will be the ultimate showdown between the best pilots from around the world in both freestyle and racing divisions,” Gulnac noted.

To see Ethan pilot a drone and the maneuvers he pulls off is mind-blowing. He does maneuvers like the ones in movies like Star Wars. Everyone should try to see him compete on Oahu in October.

One Response to Maui student soars like an eagle!

“Serving as AG of Hawaii was both a serendipitous opportunity and a tremendous endeavor. I am forever grateful to Governor Abercrombie and to the countless others who helped me navigate the job in so many ways.”
David Louie, Former Hawaii Attorney General