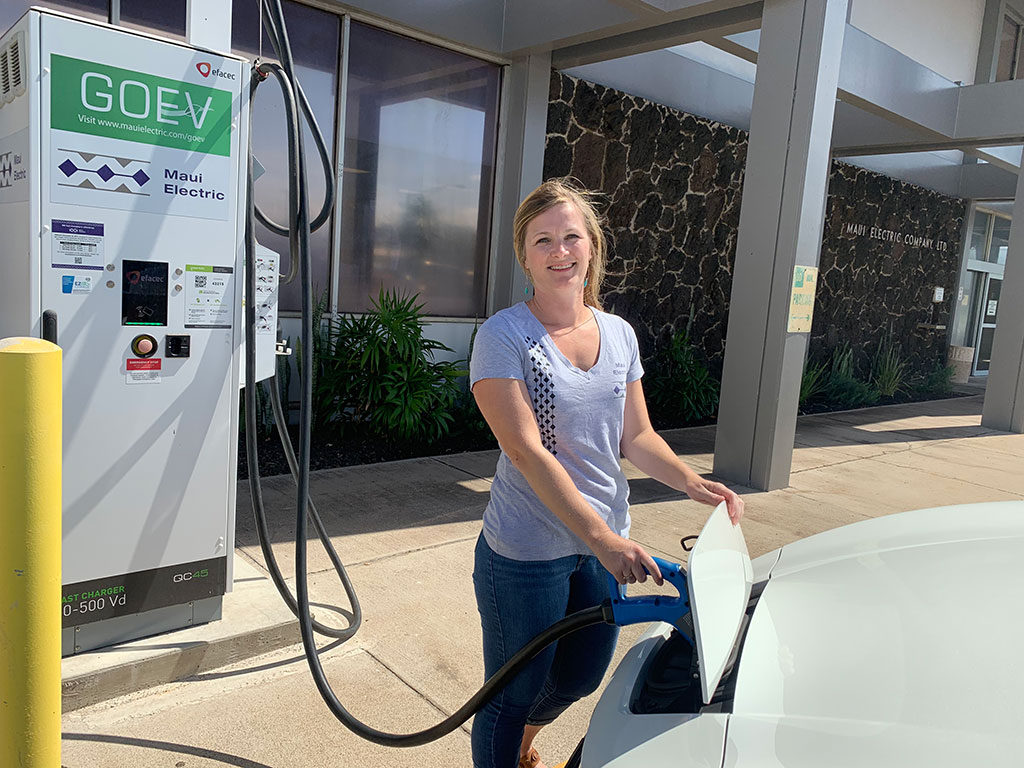 Maui Electric Company has informed the Public Utilities Commission of its intent to move forward with the ownership and operation of four electric vehicle (EV) fast-charging sites in the existing EVohana network on Maui. The EVohana sites, temporarily owned and operated by Maui Economic Development Board (MEDB), were initially established as part of the JUMPSmartMaui demonstration project, a cooperative venture between Japan, the State of Hawaii, County of Maui, MEDB, Hitachi and Maui Electric. Operating from 2011 to 2017, it demonstrated smart-grid technologies that could enable the efficient use of renewable energy on an island grid.

“MEDB, as a nonprofit organization, took on temporary ownership and operation of the EV charging infrastructure in an effort to keep the network in place,” said Leslie Wilkins, MEDB President & CEO. “We appreciate Maui Electric for stepping up to ensure our island continues to have access to reliable public fast-charging options for EV drivers. Without Maui Electric taking on some of these sites, the entire EVohana charging network would have been retired earlier this year.”

At the conclusion of the JUMPSmartMaui project, ownership of the charging assets were transferred to MEDB until a permanent owner and operator of the sites could be confirmed. MEDB partnered with Hitachi to create a new, temporary program called EVohana, which ended March 31, 2019.

Covering the Central, South, West and Upcountry Maui areas, the sites, allowing more EV types to charge, are located at the Queen Ka’ahumanu Center, Pi’ilani Village Shopping Center, Lahaina Aquatic Center, and Pukalani Terrace. EV drivers will be able to “pay-as-you-go” with multiple ways to initiate charging sessions, from smartphone apps to credit cards. Rates will be as low as 0.28 cents per kilowatt-hour between 9am and 5pm.

“As we work to add more clean energy to power our islands, EVs can play an important role in further reducing our dependency on fossil fuel and protecting our environment,” said Sharon Suzuki, president of Maui Electric. “We are pleased to add our support by taking on the four sites with lower charging rates that encourage plugging in when we have a lot of solar energy on the electrical system.”

This October, Maui Electric, along with Hawaiian Electric and Hawaii Electric Light, will be proposing a comprehensive electrification-of-transportation workplan that further details the companies’ expanded role in the deployment of EV charging infrastructure for Maui County, Oahu and Hawaii Island.